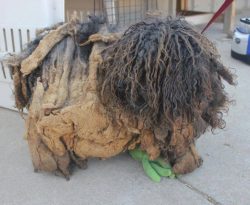 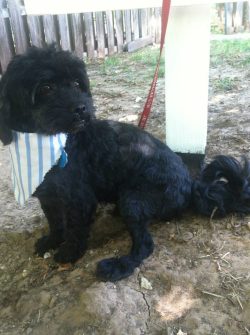 The money was used to help with medical bills for our rescued pets like Clark.

The money was used to help care for special-needs pets like Clark.

Our volunteers are used to seeing the horrible, usually “behind-the-scenes” realities of what some humans are capable of. But we get proven time and time again that there are still things that shock us and make us cry. One of our volunteers received a call from an animal control officer about a puppy mill bust in Canadian County, OK. She rushed over, along with two other rescues, to try to help the canine victims. There were 32 dogs total. One of the dogs was a mommy with newborn puppies, and one of the puppies was literally stuck in the mom’s hair and had to be cut out because the mom’s mats were so bad. This same mom was to later get a haircut, and rotting afterbirth was found adhered to her hair.

The dogs were absolutely in horrid condition. Pets & People took the remainder of what was left after the other rescues had taken some, and we ended up with two Borzoi and five Shih Tzu/Poodle mixes. All were unsocialized, scared, in horrible physical condition, and matted solid.

As awful as the pictures look, the reality was much worse. The small dogs weighed at least twice what they should have due to debris caught in their hair. The mats were solid, but when you lifted one up, there was another underneath, and another and another. They all had various kinds of worms and coccidiosis, but no heartworms, thank goodness. The condition of their hair probably kept mosquitoes from finding any skin to bite.

A wonderful Borzoi rescue in Texas took the Borzoi girls. Once they were over some of their initial fear, they were a little friendlier than the smaller dogs, but had severe dog aggression. Thankfully they found great homes and have a brand new life.

The little ones took longer. We got them all spayed and neutered, and they lived in a foster-home setting. They began to want to come to us for loving, but they weren’t sure, and they relied on each other for comfort. There were four boys and one girl. The female was adopted first, as she overcame her fear before the others, but the boys just couldn’t decide.

Those boys were so funny! They were like the Keystone Cops, running out to see us, touching us, running back into their crates and dancing over and over! They always made us laugh with their antics. We ended up naming them after the comic actors in the old movie The Apple Dumpling Gang: Knotts (fitting in two different ways!), Conway, Bixby, and Clark.

Finally, they were ready for homes, and one by one they were adopted. They were so happy, and the updates we get show contented dogs lying blissfully in their owners’ arms.

We always smile when we see pictures of them in their true “homes.” It is why we do what we do. 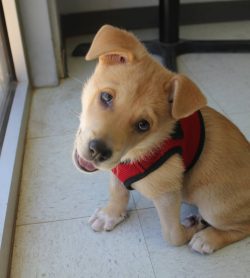 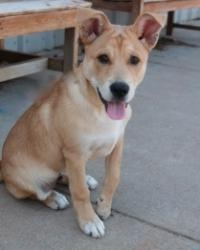 Help to cover the costs of surgery and follow-up care for puppy.

Taffy is an adorable boy. He is sweet and friendly and just wants to play with everyone! He is a happy little guy in spite of his handicap — he was born with an abnormality and is unable to extend his left front foot. After surgery to release the tendons, he wears a special boot his foster mom got him to help strengthen his foot. Unfortunately, as he grows, his left leg will always be shorter than his right. He is doing great on his house training and has recently found a forever home that will continue with his “physical therapy.”