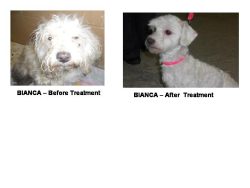 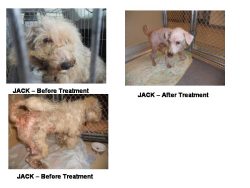 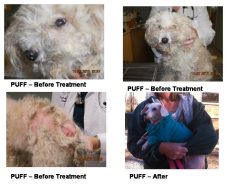 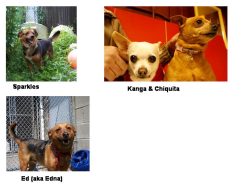 Grant money was used for medical expenses for the animals at the Montville Animal Shelter.

We were able to focus on non-routine medical care/expenses for a number of dogs. In many cases dogs found running at large were in terrible shape, heavily matted, with sores and severe tooth decay. Infection treatment was able to be provided quickly. We also have one sweet little dog with heartworm who is now receiving treatment.

A total of 7 dogs were helped, 5 have been adopted.

Chiquita (Chihuahua): Ten year old Chiquita had blood in her urine and was taken to the vet. While there it was determined that she had a heart murmur, calcium deposits caused the bloody urine and several teeth that were infected. Chiquita was treated for the urinary issue and dental work. Chiquita was adopted. This grant allowed us to pay for the medication, dental cleaning and extractions, x-rays and blood work.

Puff (Bichon Frise): Puff was found and brought to the shelter. She was severely matted, and had abscessed teeth causing her trouble when eating. Puff was sedated so she could be shaved. It was determined that several teeth were abscessed and causing her pain. They were removed. All the teeth were on one side causing her tongue to hang out of her mouth. Puff has adopted by a family with a 13-year-old daughter and has become the love of her life. This grant allowed us to pay for the sedation, cut/trim of mats and tooth extractions/cleaning.

Kanga (Mini Pin): Nine-year-old Kanga was having problems eating hard food. Dental examination determined the need for tooth extraction and dental cleaning. Kanga was adopted. This grant allowed us to pay for the dental cleaning and extractions.

Bianca (Bichon Frise): Bianca was found running on a highway by a resident and brought to the shelter. She was severely matted, covered in urine and feces and had several infected teeth. Bianca was sedated so she could be shaved and dental work to remove the infected teeth. Bianca has been adopted by a family with several children and has the life that every dog deserves. This grant allowed us to pay for the sedation, cut/trim and tooth extractions/cleaning.

Edna (aka “Ed): Although Ed didn’t appear to have any other signs, the ACO’s noticed that Ed appeared to have some “milk” and was concerned that may be pregnant after she was scheduled for her spay appointment. Not wanting to harm any unborn puppies an x-ray was performed. No puppies where found and we proceeded with the spay. Ed is a sweet girl who is still waiting to find a home. This grant allowed us to pay for the x-ray for Ed.

Sparkle: Sparkle was surrendered and was found to be heartworm positive. She is undergoing treatment. Sparkle hasn’t been adopted and we are looking for a quiet home or foster where she can continue her treatment . This grant allowed us to pay for vaccinations, blood work, medication for treatment and x-rays.

Jack (Bichon Frise): Jack was turned into the shelter because the owner could no longer care for him . He was severely matted covered in urine and had several teeth that were infected and very loose. Jack was sedated so the heavy matted fur could be removed, the loose and infected teeth were removed and sores from the matting were treated. Since he was an older guy, bloodwork was done prior to sedation. Jack has found a home with an older couple. This grant allowed us to pay for bloodwork, the sedation, shaving and tooth removal.