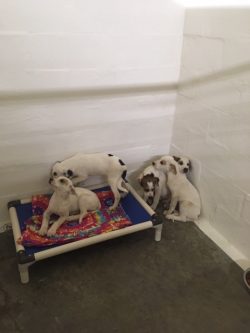 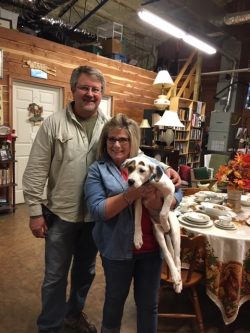 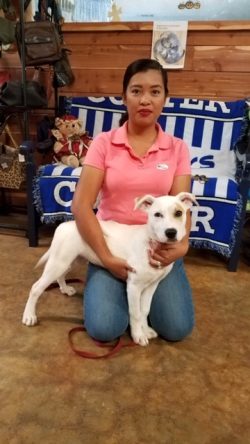 Since the construction of the kennels, we have been able to accept more animals into the shelter because we have greatly improved our quarantine capabilities. In the past, we were not able to accept litters of puppies that require 14 days of quarantine and who have a much greater risk of diseases such as parvo, distemper and coccidia.

Five puppies were found running on a dirt road in a very rural section of Marion County after being dumped. When we rounded them up, they were skinny, flea- and tick-infested and had diarrhea. After testing, we found they had coccidia. They were put in one of our new isolation/quarantine kennels and were treated and monitored. They quickly became healthy, adorable and ready for adoption. The two females were adopted from our shelter and the three males have been sent to a puppy rescue in a major metropolitan city. Some of them are still posted on our Petfinder page. Attached are photos of the pups when they came in and photos on the adoption day for the two girls. With our new kennels, we are now able to help the residents of our county when dumped puppies are found. Currently we have a litter of five new pups who have a similar story. 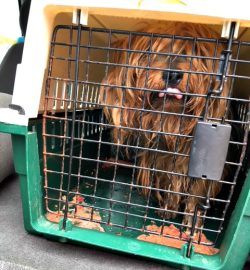 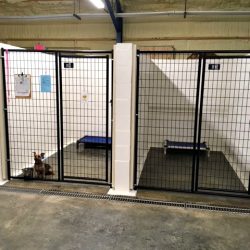 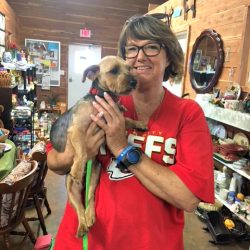 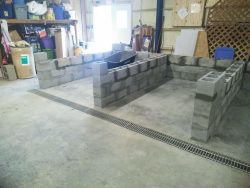 The grant money was used to construct four quarantine kennels to keep newly admitted dogs, puppies and kennel residents who become ill from spreading disease. The request for this grant was based upon education received at the Adoption Options seminar on common infectious diseases.

Prior to having the solid-wall quarantine kennels, we only had two small chain-link kennels that were separated from other kennels by about a foot of space. When they were being cleaned, water would flow between them and potentially contaminate adjoining kennels. Due to insufficient quarantine kennels, we would not accept very young puppies into the shelter, since we felt they should be quarantined for a minimum of 14 days. We also were constantly worried about the spread of internal and external parasites between newly admitted dogs or dogs who became symptomatic during their stay. Since the completion of the four quarantine kennels at the end of August, we have admitted seven dogs into those kennels. Six were new intakes (including two young pups) and one was a dog who had been in the shelter and presented with symptoms of diarrhea with unknown origin.

Seven dogs have benefit from the quarantine kennels in approximately two weeks.

JoJo is a 4- to 5-year-old male Yorkie. JoJo was found as a stray in horrible condition on a rural county road. It was evident from his condition that he had not been cared for over a long period of time. He was loaded with ticks and fleas, and his coat was so matted that you could not find his skin. We immediately gave him Capstar, wormed him and had him groomed to get rid of the nasty mess he was in. The first photo shows what he looked like at intake. Note that he was also vomiting. Photo 2 shows JoJo in one of our new quarantine kennels. He was the first dog to use the new kennels. Photo 3 shows JoJo on adoption day. In his short stay in quarantine, he was given all his vaccines, neutered, wormed, tested for heartworms and put on prevention for both internal and external parasites.

The fourth photo shows the building process so you can see what we had to do. The four quarantine kennels cost $2,203 to complete thanks to the masonry all being done by volunteers. Thank you Petfinder Foundation, for improving the quality of life of our shelter animals. 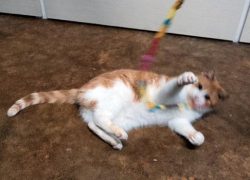 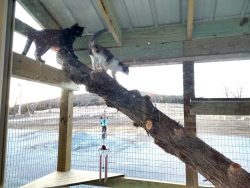 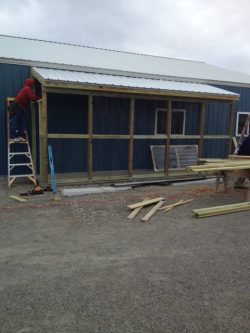 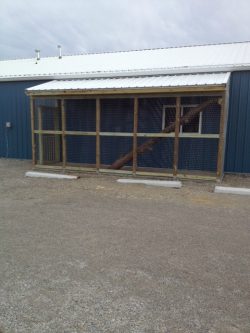 To construct a “catio” to improve the quality of life for shelter cats currently under our care.

The catio allows the shelter cats to move from inside the shelter to the outdoors where they may enjoy the sun and lounge in the safety of an enclosure. It took a little time to teach the cats how to utilize the cat door, but they have all adapted very nicely. The ability to do so greatly decreases the animals’ stress, thus making them more adoptable. It is so enjoyable to drive up to the shelter and see the cats outside having fun.

Between 12 and 24 over the course of a typical month.

Cheddar (first photo), Kitty, Angel, and Baby are four beautiful cats who were surrendered to the shelter when their owners, an elderly couple, passed away within a few days of each other. These cats had known only the safety of their home and had been able to move freely in and out at their discretion. After finding themselves in a shelter, it took a little time for them to realize they were safe and nothing bad was going to happen to them. The girls learned to utilize the cat door and began freely roaming inside the cattery and out into the catio. Baby was quickly adopted and the other three will surely be adopted soon due to their wonderful temperaments and social behavior. Meet Cheddar: http://www.petfinder.com/petdetail/41077154 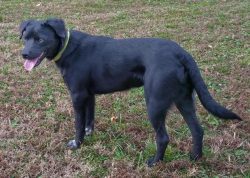 Have a Heart Pet Shelter received five Kongs, valued at $69.95. The Kong products are being used for shelter dogs and puppies who like to chew.

The grant helped five of the shelter’s dogs.

Socks, a 1-year-old male Lab mix, loves to chew. Socks will chew anything, even his bed. When Socks was given a Kong product, he stopped chewing on everything except his Kong. Meet Socks: http://www.petfinder.com/petdetail/37187782