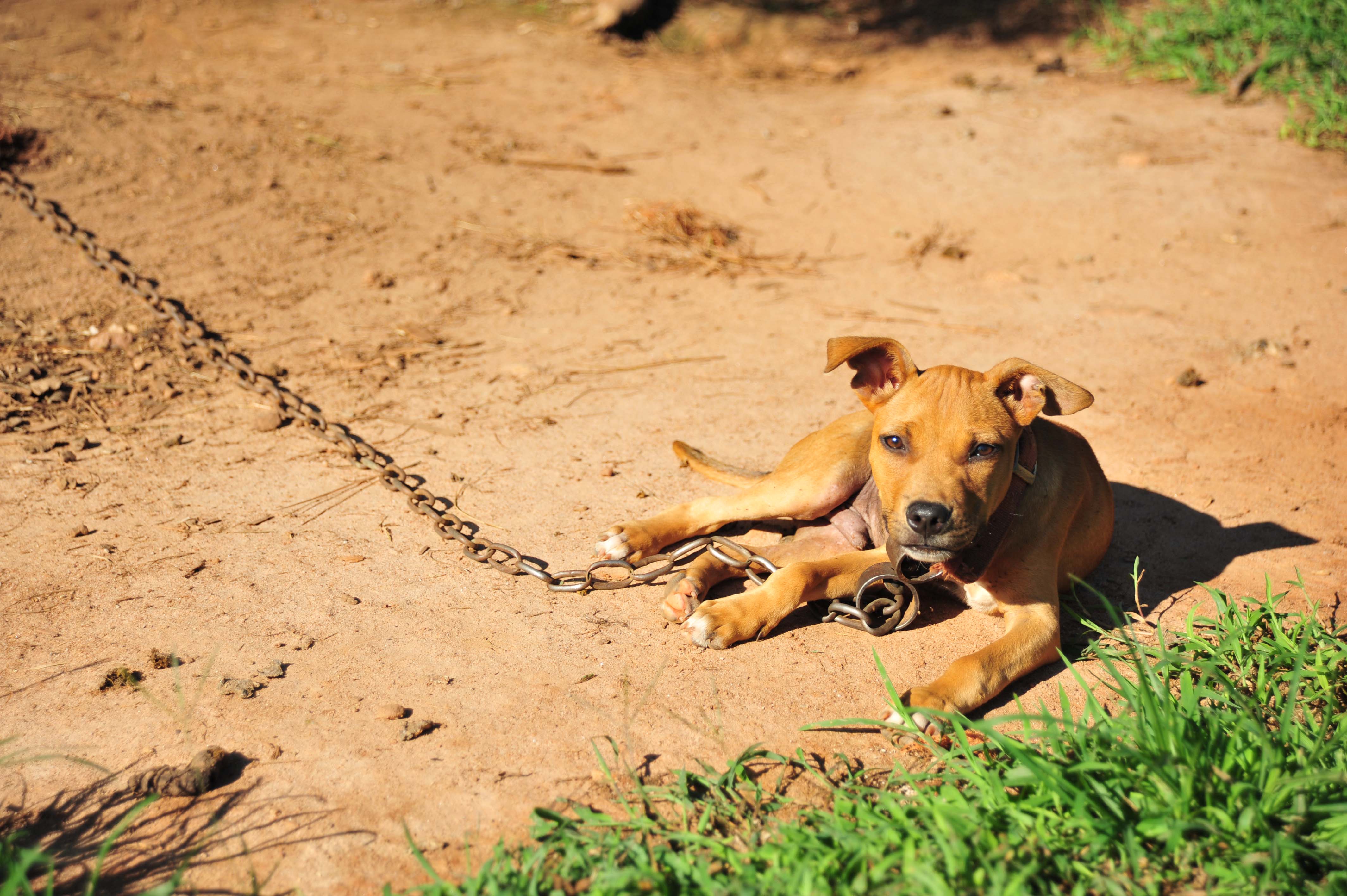 One of the 367 dogs rescued from a multistate dog-fighting ring (Photo: ASPCA)

When 367 dogs were rescued from a multistate dog-fighting ring last month, a Petfinder Foundation-funded truck and trailer helped the International Fund for Animal Welfare (IFAW), the Humane Society of the United States, the ASPCA and other agencies save their lives.

“We couldn’t have done it without that equipment,” Shannon Walajtys, IFAW’s animal rescue program manager for disaster response, tells us.

The Petfinder Foundation granted the truck and trailer to IFAW in 2007, just after Hurricane Katrina struck.

“The truck was one of three animal-rescue rigs that were integral in our support of HSUS,” Gardner says. 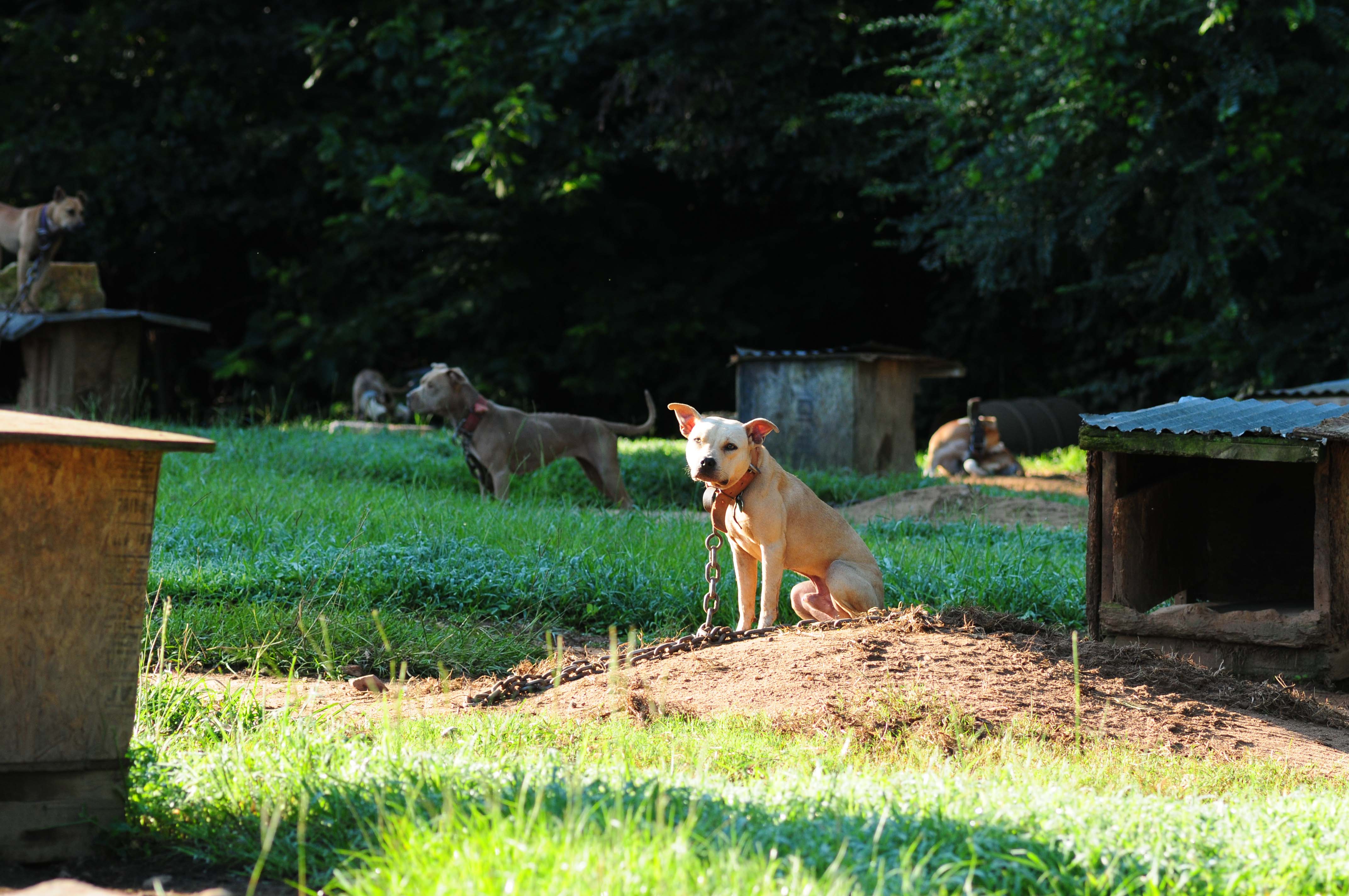 The rescued dogs had been subjected to extreme heat without fresh water or food. (Photo: ASPCA)

The truck and 36-foot trailer were loaded with field equipment and also offered a refuge for first responders. “It was that go-to vehicle that had the first-aid kits, the coolers with water and Gatorade, the fruits and vegetables we brought for responders. It was the place for people to take a five-minute break when they needed to after being on the crime scene,” Walajtys says.

Walajtys says the 367 seized dogs have been moved to temporary shelters and that IFAW will continue to assist HSUS and the ASPCA as needed on the case. Meanwhile, the Petfinder Foundation’s truck and trailer have moved on to their next assignment with IFAW.

“It’s been demobilized and sent to Mississippi,” Gardner says, “so it can be ready and staged during the hurricane season.” 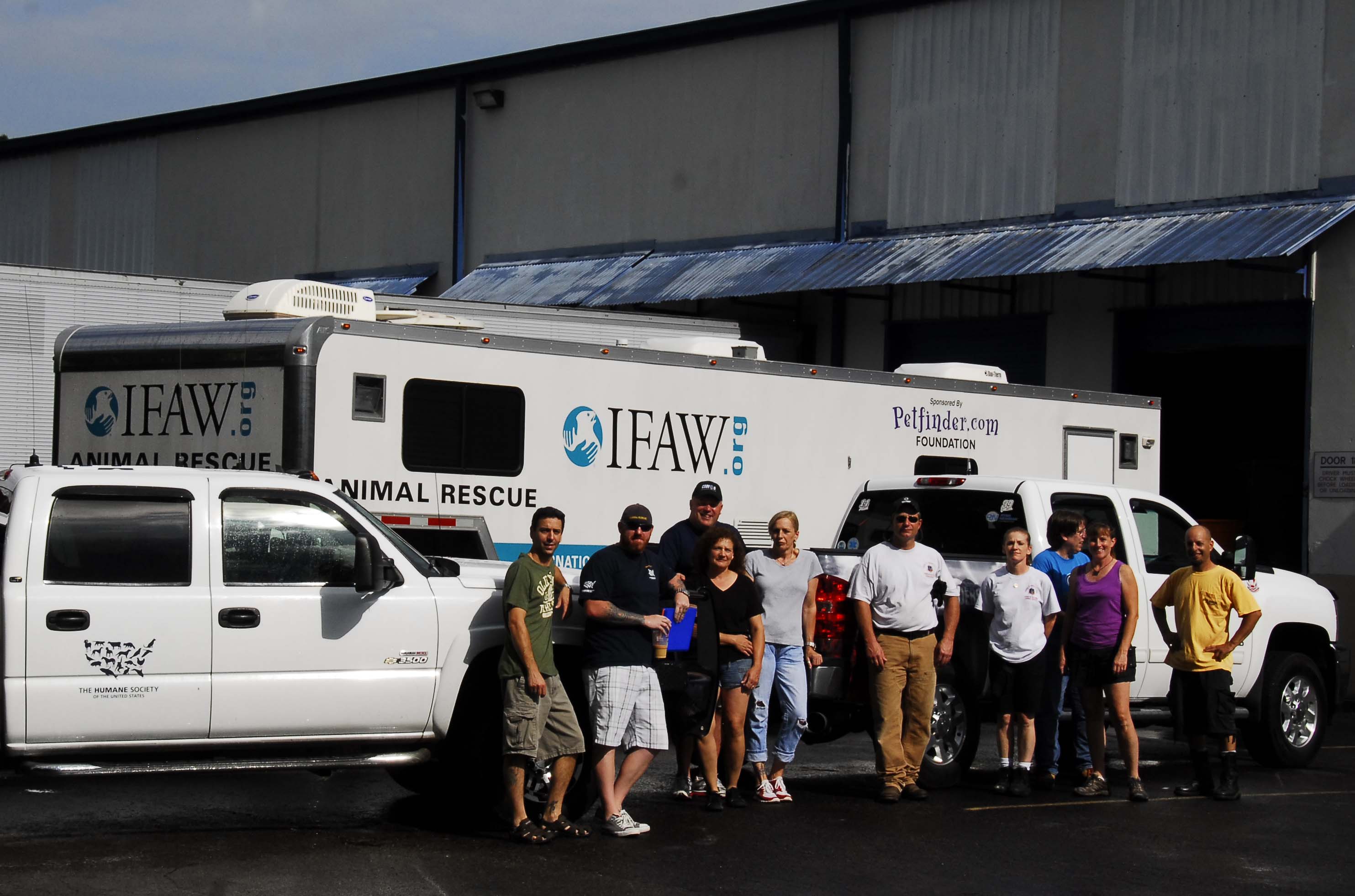 The Petfinder Foundation truck is ready for its next lifesaving IFAW assignment. (Photo: IFAW)

The Petfinder Foundation has always been concerned with the safety of homeless pets when a disaster hits.  Hurricane Sandy is no exception. Our hearts go out to everyone affected by the Frankenstorm including our fuzzy friends. At this time, the Foundation is preparing to help Petfinder members in a variety of ways, including providing disaster relief grants, assistance with transport of homeless pets to safer areas and providing education and care to those who need it.

Here are some of the ways that we are helping:

The Petfinder Foundation partnered with International Fund for Animal Welfare (IFAW) to fund a recovery and disaster vehicle. The truck has proven to be helpful in a variety of ways when a storm hits. Often the PFF truck is loaded up with supplies like food, medical equipment and crates to help homeless pets affected by a storm. Once deployed, the truck provides additional assistance by transporting homeless dogs out of the disaster area to a safer environment where they are better able to find forever homes. Currently, the Petfinder Foundation rig is loaded up with boats and water rescue gear in preparation for water support of the devastated areas. The truck is also prepared with sheltering supplies to make sure to address whatever unmet animal needs there might be following the storm.

The Petfinder Foundation partners with National Animal Rescue and Sheltering Coalition (NARSC) to address specific needs when disaster hits. As there is a great need with Hurricane Sandy, we are actively working with our NARSC partners to ensure that proper procedures are followed and that organizations are working as a team to bring the best support to affected shelters and rescue groups.

Hurricanes and other disasters can devastate animal rescue and shelter organizations. The Petfinder Foundation oversees a Disaster Fund to help pets and animal welfare organizations when natural or man-made disaster hits a community. We are currently accepting applications from Petfinder members who were hit by Hurricane Sandy. We have already received several applications and are reaching out to groups to award disaster grants and help them through this troubling time.

As we move forward with recovery efforts, the entire Petfinder Foundation would like to personally thank all the shelter and rescue groups staff and volunteers for their time and effort to help save the lives of homeless pets.

To support the Petfinder Foundation Disaster and other programs, donate here. 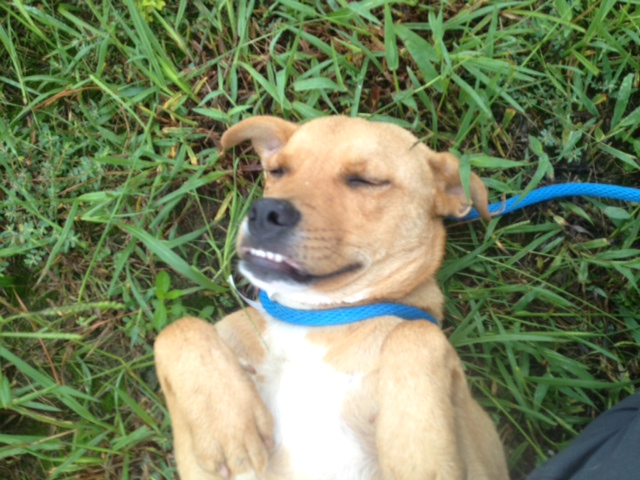 You can help us save animal victims of Hurricane Isaac: Donate to the Petfinder Foundation today and Animal Planet will DOUBLE your gift! 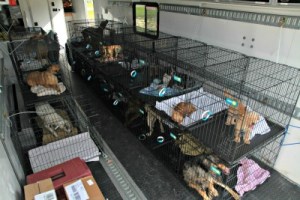 The IFAW team supporting Hancock County Humane Societyin Mississippi is on the road in the Petfinder rig along with 29 dogs. The dogs are routinely monitored and get to stretch their legs several times a day.

The first stop on the IFAW journey north is the Washington Animal Rescue League in Washington, DC, where we’re scheduled to arrive the morning of Sept. 6.

[Right: On a walk break in Georgia while on the road from Bay St. Louis, MS, to D.C., rescue-rig driver Steve, who adopted a one-eyed kitten from the shelter while the truck was in Mississippi, cuddles with an adoptable dog.] 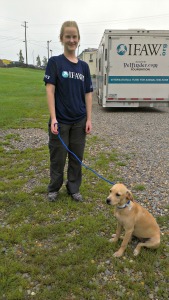 Later that same day, more dogs will disembark at Bucks County SPCA in Lahaska, PA. The rig then heads to Maine where on Friday morning, the last of the Hurricane Isaac dogs will unload at the Greater Androscoggin Humane Society in Auburn.

[Right: IFAW program officer for disaster response Jennifer Gardner takes a dog for a break to stretch his legs in Georgia.]

The Petfinder Foundation purchased an animal-rescue truck for our partners at the International Fund for Animal Welfare to save animals in disaster-afflicted regions. The truck is now on its way to the Northeast from Bay St. Louis, MS, transporting adoptable pets from the Hancock County Humane Society to make room for pets whose families had to evacuate the area. (Read our previous post.) 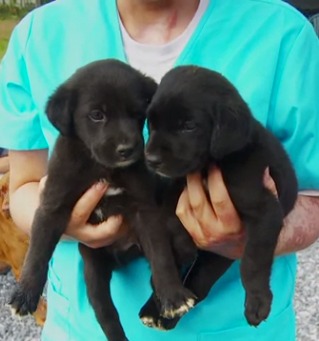 You can help: Donate to the Petfinder Foundation today and Animal Planet will DOUBLE your gift!

Last night we stopped in Greenville, AL, to rest for the night.

We took the dogs out of our wonderful 36-foot rescue trailer funded by the Petfinder Foundation and all the dogs went for walks and were doing really well after such an eventful day!

Earlier, we left the Hancock County Humane Society (HCHS) after staff and volunteers wished the dogs well on their journey up north.

We loaded 29 dogs and headed to Coast Veterinary Hospital in Gulfport, MS, where Dr. Jackie Broome and her staff quickly went to work spaying or neutering some of the dogs and preparing all of their health certificates for travel.

Before leaving the hospital, Steve, our driver for our rescue rig, fell for a one-eyed kitten and adopted him! He will be traveling with us so he can join his new family in Massachusetts that includes three feline brothers and sisters.

The folks I spoke with in Mississippi all seemed to tell a similar story of how Hurricane Katrina devastated their community, and while there was a coincidence of Hurricane Isaac making landfall on the same date seven years later, they didn’t think its impact would be as great as a Category 1.

No one expected Isaac to stick around for so long and they were surprised at the amount of rainfall. Luckily the new shelter director of HCHS, Toni Necaise, moved the animals out of the shelter before the storm hit as she knew the area was flood-prone.

She made the right choice because, while the shelter didn’t flood, the road to the shelter did. They would not have been able to access the shelter to care for the animals until the water subsided.

Toni only joined HCHS three months ago and I was impressed by her preparedness.

I am so grateful for the rescue groups that allowed us to leave HCHS knowing that the facility was back to normal and they are better prepared for the storm’s aftermath.

All of the dogs are quietly resting as we make our way to the Washington Animal Rescue League in D.C. for our first drop-off.

Thanks to all for the kind words and donations — they keep us going! 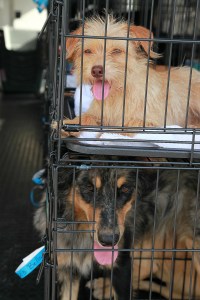 Note: If you are a shelter or rescue group impacted by Hurricane Isaac and would like to request funds, click here to apply for a disaster grant from the Petfinder Foundation.

This weekend our partners at the International Foundation for Animal Welfare loaded up their Petfinder Foundation-funded mobile rescue and recovery vehicle and headed down to Hancock County Humane Society in Bay St. Louis, MS, to help save pets displaced by Hurricane Isaac.

As you’ll see in the video above, the shelter needed some repairs made and, more urgently, needed to make room for pets stranded by the storm.

So rescuers loaded up the IFAW truck with 29 adoptable dogs who were already living at the shelter, to open up kennel space for dogs who’d been separated from their families or whose families had been forced to evacuate.

Right now the truck is en route to drop the dogs off with several adoption partners, including: 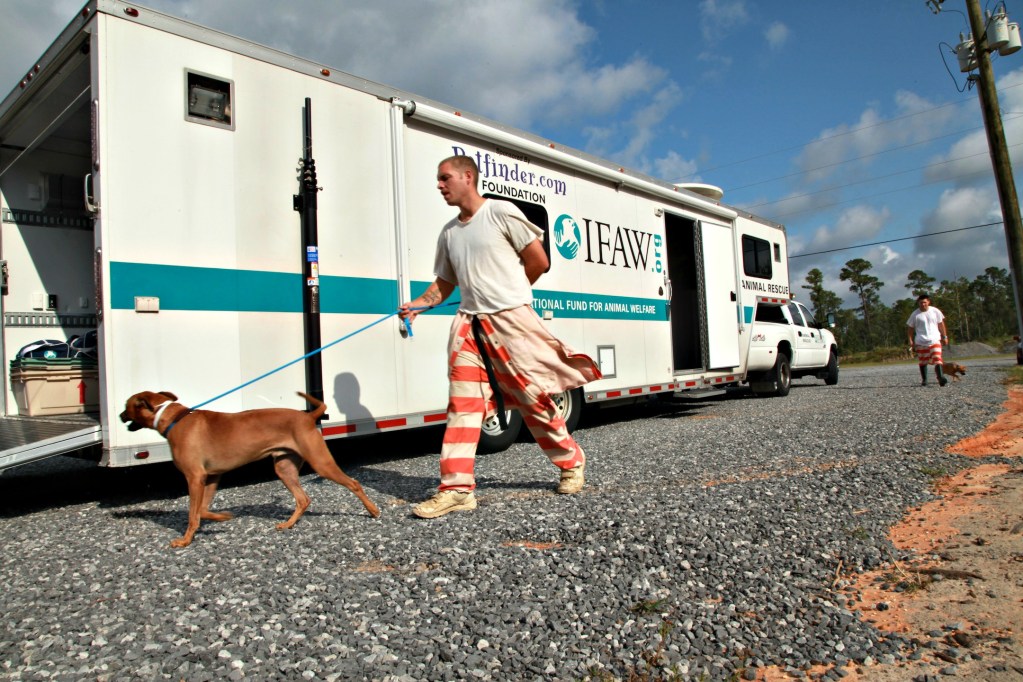 A volunteer walks a dog to the Petfinder Foundation IFAW rescue truck in Mississippi.

If you want to help us help pets displaced by Hurricane Isaac, donate today — best of all, if you donate through Global Giving, until Oct. 31 Animal Planet will match your gift dollar-for-dollar!