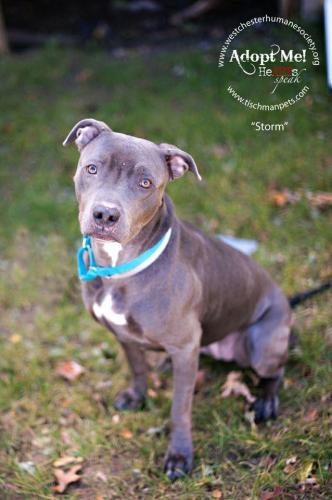 Westchester Humane Society got a disaster grant from the Petfinder Foundation to care for the animals it took in because of Hurricane Sandy. Board member Irma Jansen wrote to us about one of those refugees, a Doberman/American Staffordshire Terrier mix named Storm (pictured above). 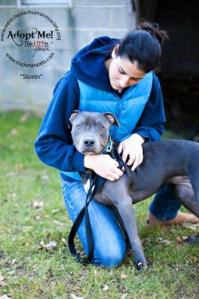 Storm with a pal

This is Storm, one of the 18 animals the Westchester Humane Society in Harrison rescued from New York City. Storm came from Staten Island the day before the hurricane hit.

They were evacuating shelters and were overcrowded. In order to help prevent a lot of animals from being euthanized, we rescued a total of 18 dogs and cats.

Storm, named in ‘honor’ of the hurricane, was saved from Sandy and did not seem to care that a week after the hurricane, a snow storm hit our area! It has been quite a week in the NYC area.

She loves the snow, this 2-year-old girl! She is an absolute sweetheart and we are happy we were able to have saved her. Thank you so much for making this rescue possible!

Some of the other shelters and rescue groups receiving disaster grants in Sandy’s wake include: 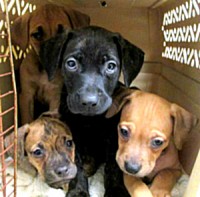 These puppies, at Tails of Love Animal Rescue in Staten Island, will benefit from a Petfinder Foundation disaster grant.

We are able to help these organizations continue their lifesaving work thanks to donors like you. Thank you to all who gave — every little bit helps.