Give to us through Global Giving through Nov. 12 and have double the impact for homeless dogs like Jace.

When you donate to us through Global Giving through Nov. 12, you’ll help shelters save twice as many homeless dogs like Jace (pictured) when devastating disasters strike.

Through Nov. 12, Animal Planet’s R.O.A.R. is matching donations to the Petfinder Foundation dollar-for-dollar (learn more about the campaign here). That means your gift will help shelters save more pets after they are struck by disasters like Hurricane Isaac, which decimated the vaccine and medication supply at St. John the Baptist Parish Animal Shelter in LaPlace, La.

Shelter Manager Racheal Sance tells us how our disaster grant helped the organization after the August 2012 hurricane hit:

“It was upsetting to say the least that we lost supplies necessary to treat animals with minor illnesses and injuries. To be able to treat certain animals gives us the ability to place them for adoption rather than having to euthanize due to a lack of funds.”

Because of the grant, Sance says, “We were able to order medications through MWI Vet Supply to replace a portion of what was lost. We were also able to alter 27 dogs and 10 cats to send to local rescue groups and to send on a transport offered by LASPCA. This allowed us to free cages for incoming animals and send adoptable animals out of our shelter alive at a time when we were at capacity with animals coming in daily.

“Recovery lasted several months so it wasn’t until the beginning of 2013 that we were able to start playing catch up and use the funds that were awarded to us. We purchased Nobivac canine vaccines, for parvo/distemper prevention, antibiotics to treat infections from wounds or URI, pain medication for animals recovering from spay/neuter as well as those injured, tapeworm tablets to treat tapeworm in canines and felines, lyme sulfur dip to treat skin infections/ringworm, and syringes to administer the vaccines.”

Among the more than 50 animals our grant helped the group save after Hurricane Isaac were Jace (above) and Brutus (below). 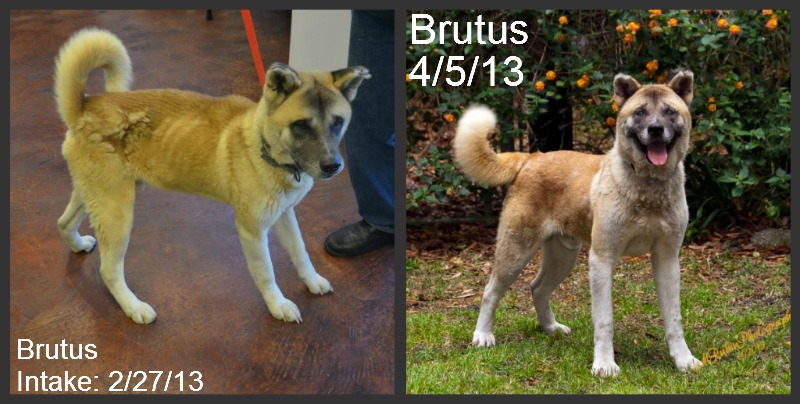 “We took in two Akitas from a local backyard breeder. They were both severely underweight and riddled with heart and intestinal worms,” Sance says. “We posted their pictures and sent out emails requesting assistance from anyone with an Akita rescue. Their story spread far and wide and because we were able to vet the dogs for the two rescue groups they were able to afford the transport and heartworm treatment which allowed them to pull the dogs and get them to safety. The smaller male was 11 months old and weighed only 30 pounds. Akitas are normally in the 70- to 110-pound range and sometimes even larger. The are now thriving and waiting for their forever homes.”

Donate to us through Global Giving through Nov. 12 to double your impact!