Thanks to a Petfinder Foundation grant, the Michigan Humane Society has purchased a new rescue van to save abused and injured animals in the beleaguered city.

“This generous gift from the Petfinder Foundation will travel thousands of miles each year to rescue animals in need,” says MHS’s Interim President and CEO, David A. Williams. “The Petfinder Foundation will help us save the very lives we may then re-home using the most widely recognized website that has placed millions of animals, Petfinder.com. We are grateful for such a great partner. The support is vital and very much appreciated.” 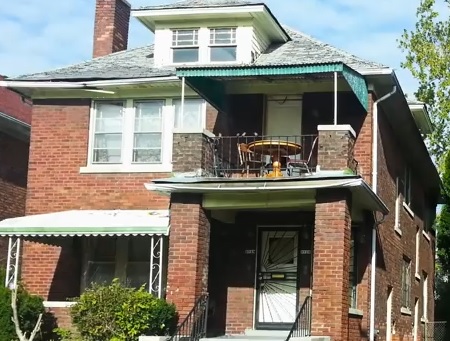 At this Detroit home, Flutter fell from the second-floor porch onto the concrete patio below.

The $40,000 grant, part of our SNAP-X Detroit project, will mean more help for abused and injured animals like Flutter, a puppy rescued after falling from a second-floor porch.

Flutter’s owner called the MHS Rescue Department the day after the 4-month-old German shepherd mix fell off the porch.

Once at the shelter, it was clear that Flutter was in terrible pain and could not put weight on either of her front legs. X-rays confirmed that she had broken both legs.

Vets outfitted her with two pretty pink casts, and she went into a foster home — with Stacey Bean, the rescue driver who’d saved her! A few months later, after Flutter had made a full recovery, her story was featured on the local news, and she was immediately adopted by Esther Martinez, who’d already adopted two dogs from MHS. “She was just adorable, and I loved her from the moment I saw her,” Martinez told MHS. Watch a video on Flutter’s adoption.