Alvin is one of the adoptable pets at H.E.A.L.S. in Lodi, NJ.

When Hurricane Sandy hit the east coast on Oct. 29, 2012, many animal shelters lost power and supplies. One of them was Helping Every Animal Live Society Inc. (H.E.A.L.S.) in Lodi, NJ, which received a $2,500 disaster grant from the Petfinder Foundation. H.E.A.L.S. cofounder Benjamin Ortiz wrote to tell us about the impact the grant had for his organization.

“Days prior to Hurricane Sandy, H.E.A.L.S. had rescued 12 puppies and four adult dogs from a southern shelter that was scheduled to euthanize them on the same day that Sandy was set to make landfall in New Jersey. H.E.A.L.S. knew that this was unfair to these sweet babies and made the decision to save them from a sure death and bring them home.

“We knew the battle to keep the dogs alive was just starting when we saw how intense the storm had become and the condition of the puppies when they arrived at H.E.A.L.S. They had upper respiratory infections along with canine influenza and were immediately treated and prescribed antibiotics and cough medicine. It seemed they had gotten sick during their transportation from the south and the stress of transport made their illness worse — these babies needed a lot of T.L.C. 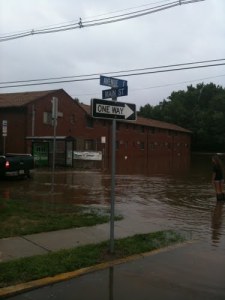 Flooding outside the H.E.A.L.S. shelter in Lodi, NJ.

“The antibiotics that were prescribed needed refrigeration, as did many of the vaccines we had in stock, so we made sure we had a generator prepared in case we lost power. H.E.A.L.S. prepared as much as possible for the worst, but Hurricane Sandy planned to outsmart us.

“When the storm hit, we lost power within the first hour and flooding began soon after. The generator was knocked off the platform and swept into the nearby river. We immediately filled our coolers with bags of ice that we had bought in case all else failed and put all the medications in the coolers.

“When the storm had passed, the ice in the cooler had melted and the puppies’ condition has shown very little improvement. The medication was no longer refrigerated and no vets or animal hospitals were open due to their own damages and power failures. Sadly, many of the puppies’ got worse. Days passed and still no power; gasoline became a privilege. We struggled to find fuel to transport these animals to Pennsylvania to receive proper medical attention, but it was impossible.

“Finally, after a week, some power was restored and we received notice that a nearby vet was now open for a few hours. We immediately ran there with the puppies. After a full check-up, the vet advised us to hospitalize the puppies because their condition was critical and it was going to take a lot of medical treatment to get them healthy again. The bill for the treatment and the hospital stay, after a discount, would come out to $2,446. We could not afford this enormous bill. But we told the vet that we would have the money and to please treat our babies (we knew that their lives were more important than a bad credit report and there was no way that we were going to let them die).

“I cannot tell you how much stress I was under at that moment. I had no idea how we would raise $2,500 in two days. That night, I went home, opened up my e-mail and saw a message from the Petfinder Foundation. This angel by the name of Toni Morgan had sent us a grant application. I immediately filled it out and prayed that we could get something to cover at least half the vet bill.

“God knew what He was doing, as always, and this angel was at work for him. Within a few days we received an e-mail stating that we were approved for the grant and that the check was in the mail. THIS WAS THE MOST UPLIFTING MOMENT EVER! I immediately printed this e-mail, showed it to the vet and was granted some time to pay the bill. The most incredible thing was that when the checked arrived, it was for $2,500 — just the right amount! The Petfinder Foundation was and still is our ANGEL! THANK YOU for everything! You GUYS ARE AMAZING!”

We are so happy we could help H.E.A.L.S. and its dogs survive the storm and their illness. Thank you to everyone who donated to our Hurricane Sandy relief efforts to make lifesaving grants like this one possible!