Today, our program assistant, Brody Anderson, brought the Petfinder Foundation to a screeching halt for about five minutes. I was on the phone talking with one of our partners when I heard the screaming begin. What started as unintelligible squealing eventually turned into one understandable word: “Puuuuupy!!!” As soon as I was off the phone I rushed in to see what all the fuss was about, and this is what I saw: 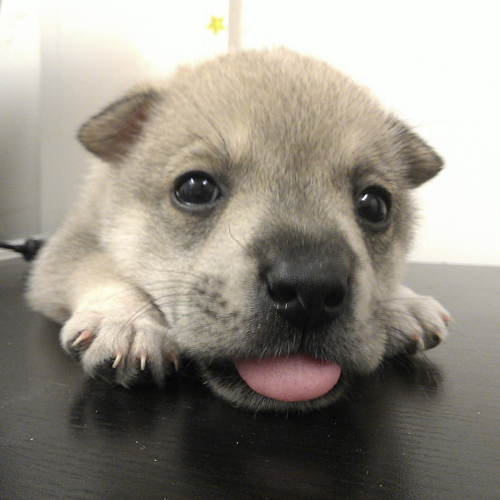 This is the culprit who brought the Petfinder Foundation to its knees.

Bringing a puppy into the Petfinder Foundation offices is a recipe for distraction. Work ground to a halt, and this little girl (who doesn’t have a name yet—any ideas?) was showered with affection. I think Scarlett, our executive director’s lab mix and another office dog, felt a little left out. 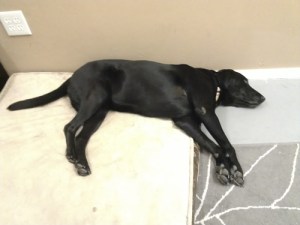 Executive director Lisa Robinson’s Lab mix, Scarlett, felt a little left out. She was given a ton of love and treats shortly after this photo was taken!

Despite our inclinations to take the day off and play with the puppy, we knew we needed to go back to work. I decided I needed the best of both worlds, and so as I write this post, the puppy is sleeping in my lap. 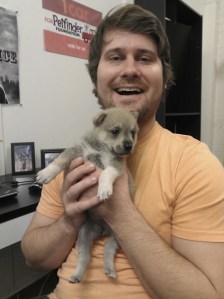 This is how Noah reacts when a puppy comes in the office!

As it turns out, this little girl is part of a litter of four that Brody found and nursed back to health. They look like Chow/Husky mixes, they’re approximately three months old, and all of them are adorable. Brody’s mother adopted one of them, but the other three still need homes. Stay tuned!