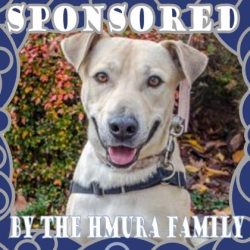 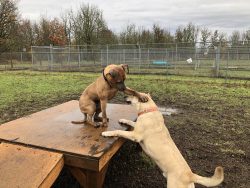 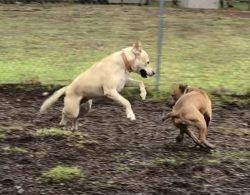 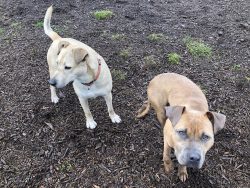 It was used to have contract playgroup trainer Jessi Henry attend the mentorship in Austin, Texas. She has attended three seminars with Aimee Sadler at Dogs Playing for Life, starting when Aimee came to WHS for the first time in 2008. Jessi has been doing playgroups ever since. She was an employee for over 10 years and now she is a contract trainer and only does playgroups for the shelter and the public. She is also a Pro Responder for the ASPCA’s anti-cruelty behavior team and a task that is included in that is helping with playgroups with those populations of dogs as well.

Jessi says: I have been to three seminars from Aimee and DPFL and have been running playgroups since she came the first time in 2008. Attending this mentorship not only taught me some things I did not know, it also gave me more confidence in the way I was running playgroups and knowing that I am actually running them very close to the way DPFL and Austin Pets Alive! run them. The seminars taught me a lot throughout the years, but actually having someone watch and give me feedback for four days was extremely helpful to me.

It has helped hundreds so far and will continue to help hundreds.

Hoagie (pictured with some of his playgroup friends) has been a long-term resident. He came to playgroups in the beginning but then started to decline and seemed to not enjoy them anymore. He also seemed to be getting kennel stressed (common in long-term shelter residents). He has been being worked with through our Behavior and Training Team on basic skills and impulse control.

When I got back from the mentorship, I thought about Hoagie a lot and everything I’d learned. They had similar dogs in their shelter and playgroups were helping those dogs in a significant way. I gave it another shot and set up a yard for Hoagie to ease back into playgroups.

We did start out using precautions such as a muzzle and drag lines. This lasted for a very short time and then I was able to remove this equipment. While Hoagie’s “friend” pool is smaller, he has been able to get out multiple times a week and work off some of his energy. He has even lost some of his extra weight and is looking great, mentally and physically.

Hoagie is still currently up for adoption and waiting for his perfect forever home, but in the meantime he has been having a great time with his pals, both two-legged and four). I am so glad that I had the extra confidence from going to the DPFL mentorship to give it another go with Hoagie. It warms my heart to see him acting like a dog! Meet Hoagie here.