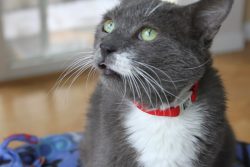 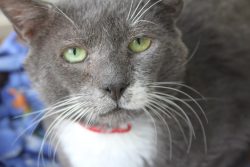 The grant NWAC received from the Petfinder Foundation has been helpful with both the health care costs for Elmer, our senior foster cat with multiple health concerns, and with the adoption transport of Luthor, our senior dog who has impaired vision and hearing. Elmer will receive the majority of the money, which will be gifted to his future owner to be used for his healthcare costs. Luthor’s adopters were reimbursed for the cost of fuel. They willingly drove from Idaho Falls, Idaho, to Portland, Oregon, to meet him, adopt him and take him home.

The Petfinder Foundation’s grant will help ease the cost of Elmer’s healthcare for his future owner. It has also helped free up one more NWAC foster home for another animal in need of care.

Both Elmer and Luthor were directly impacted by this generous gift.

Luthor is a Lhasa mix, a senior dog who was found in Hermiston, Oregon, wandering the streets by himself. His eyes have advanced cataracts, his hearing is severely impaired and he was found to have a couple of herniated back discs. He was underweight and in pretty rough shape. He was taken in to shelter care by our companion rescue, Fuzzball Animal Rescue, and after brief vetting in East Oregon, transferred to NWAC. He was found to be fairly healthy, considering his age, which we guessed to be 12-plus years old. He stayed in our care for five months and was then adopted to his new family. He now lives with his sister, Callie, and mom in Idaho.

Elmer is still waiting for his forever home. You can meet him here. From his Petfinder profile: “It is time for our beloved long-term foster to spread his wings and find his forever home! Elmer is a volunteer favorite for all who meet him. This friendly cat loves other cats, and all people, including little kids. This laid-back cat is delighted to play with his toys, or just hang out with you! He craves attention and will be your constant shadow. His purr may be measured in decibels!

“Elmer came to our rescue in April 2019 as a scruffy, battered stray cat. He was around 7-8 years old, had not been neutered, and had suffered some trauma that left him with several badly broken teeth. We tested him, as we do every cat, for feline leukemia (FeLV) and feline immunodeficiency virus. He was negative for the FeLV, but did test positive for FIV. FIV is spread among cats via deep bite wounds and sexual contact. Elmer was not neutered, so it was not overly surprising he tested positive. Elmer is now neutered, has had his broken teeth removed, has been vaccinated, dewormed, microchipped, treated for fleas and well-loved! Elmer comes with detailed veterinary records and lab results.

“Elmer’s story does not stop here, though. His foster noticed that he had developed diarrhea and was drinking a lot of water. After his lab work was done, he was diagnosed with diabetes and food allergies. After months of food trials and insulin injections, Elmer went into diabetic remission, and now no longer needs insulin! He is on a special canned food and receives an oral medication just twice weekly to keep his food allergies stable. Elmer comes with a veterinary consult to discuss long-term management of his issues, which are now stable.

“While Elmer is now doing GREAT, there is a chance he may come out of diabetic remission and need insulin again. He also will need more frequent veterinary visits than most cats, as he needs labwork performed at least twice yearly. Elmer is more prone to infections due to the drug he is on and his FIV+ status. He must be strictly indoor-only, which is fine with him.

“Elmer sounds like a lot of work, but he is such a neat cat. He is so easy to medicate, always uses the litterbox, loves all people and all other cats he has met so far. He would not enjoy being in a house with a dog, however. Can you give Elmer the home and the medical care he so richly deserves? He is worth it.”