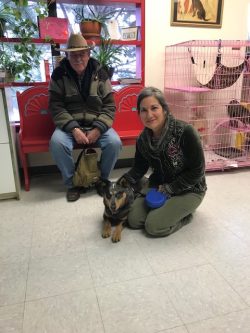 Construction of fencing/gates for more play areas in order to expand our Dogs Playing for Life program.

The grant helped to better establish and broaden our Dogs Playing for Life program. We now operate the program at least two days a week (Tuesday and Friday) and more dogs are participating. We believe it has directly led to more pet adoptions since the dogs are less stressed and more sociable.

Tamira was an older puppy who came to us at about 6 months of age. She had never been socialized and was very shy and fearful of other dogs. She initially was put in a playgroup with only one other dog who was an older, gentle dog. As her confidence in interacting with this dog grew, she was moved to a more active group of older puppies who actively played. She then advanced to a mixed-age dog playgroup. Shortly thereafter, she was adopted into her forever home. We believe the three playgroups that she participated in over a two-month period made a huge difference in helping her to be adopted.