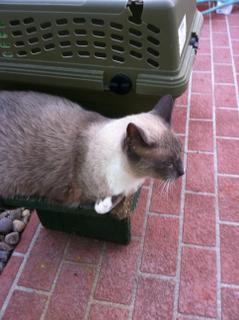 The sponsorship money for Linus was used to help pay for dental work he needed. Additional money received was used for general care.

This sponsorship made it possible for YAAP to provide Linus with the dental work that he desperately needed.

Linus is a three-legged Siamese cat who was found in 2012 roaming the streets of York, Neb., several times. The first couple times he was brought to York Adopt-A-Pet, he was claimed by his owners. The final time he was brought to the shelter, his owners never came to pick him up. We do not know how Linus lost one of his legs but it has not affected him in any way. Linus has a mind of his own and was having a hard time adapting to shelter life, so a foster home was found for him. He has spent the last two years living in a beautiful backyard with a heated and air-conditioned shop to come and go as he pleases. Life is grand for him. A few months ago his foster mom ask YAAP if it would be possible for Linus to have some dental work done. His sponsorship could not have come at a better time, as the dental work would have been done but the sponsorship money lessened the financial burden on YAAP.