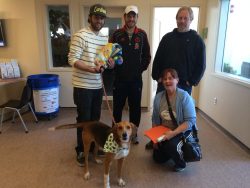 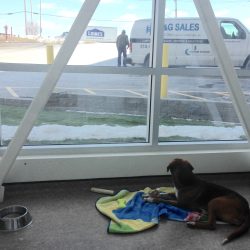 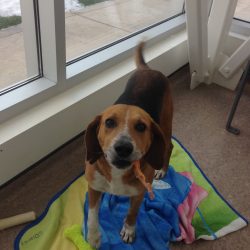 This grant paid for medication, supplies, utilities and salaries for the animals in the APA’s Pet Transfer Program.

76 dogs were brought in through this program in February

Tony the Foxhound mix was transferred to the APA Adoption Center by our humane friends in Texas County, Missouri. This 5-year-old American Foxhound mix had clearly spent his life outdoors as a hunting dog. He had a slit in one of his ears that was likely from ear notching, a way some hunters identify dogs in their own pack.

Tony wasn’t exactly what you could consider “well-mannered.” If he smelled something interesting, nothing kept him from standing on his long back legs to go check it out. He simply followed his whims (and hound nose) wherever they took him, even if it meant knocking over a coffee maker with a full pot of coffee in it! He didn’t mean harm by his mischievous behavior; he just didn’t know how to behave indoors.

We thought that rather than try to force Tony to acclimate so quickly, we would give him some transition time to get used to being indoors. The APA has large visiting rooms in its front lobby, which are encased in glass and look out onto the traffic on the road and in the parking lot. Tony spent a lot of time in there just watching people go by and being close to the outdoors again. One day not too long after we began putting Tony in the visiting room, a family walked by that doggy in the window and saw a special pup who needed guidance but had plenty of love and affection to share. They adopted Tony!

Now this former hunting dog is learning the ins and outs of home life with an excellent family who decided it wasn’t too late to teach an adult dog new tricks.