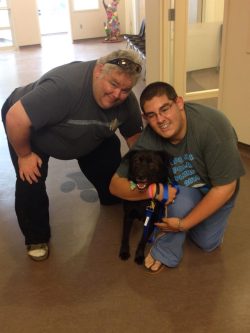 This funding paid for program supplies, medication, utilities and staff salaries for the animals in the Pet Transfer Program.

Not perfect, but perfect for them: When Eddie arrived at the APA in December 2014, he was coming from a rural area where he had not learned a lot about city living. Because he had never been housetrained, and because he was not neutered, Eddie marked. And marked. Everywhere he went, Eddie left his signature. This, obviously, wasn’t the most desirable trait to see in a potential housemate. So, as with all our animals, we neutered Eddie and started working on housetraining. Eddie also hadn’t mastered a lot of basic pet skills in his life — he jumped on people and pulled on his leash — so we entered him into our PRAISE dog training program, where he did great and learned several basic commands, attention lessons, and how to just be a mellower dog around people.

Although it took a lot of time and love, our dedicated dog walkers provided Eddie both those things in abundance. They came in several days a week to work with Eddie, socialize him, and help him learn. It wasn’t a quick process, but it turned out to be just what he needed. Eddie’s energy levels became more regular, he learned how to walk more calmly on a leash, and he followed the “four on the floor” rule for dog paws.

One day in May, a man came in just to look around at dogs. He wasn’t sure what he was looking for, and he wasn’t planning to adopt anyone that day. We’re always happy to see people taking their time to carefully consider their new pets, so we encouraged him to browse as long as he liked. He left that day and came by again soon after, again just to look. About a week later, he was back, this time with his son, a young man who was very excited to meet a potential new pet. They visited with several dogs before asking to see Eddie. When Eddie came in the room he happily sniffed around for a minute before proceeding right over to the man’s leg and greeting him, Eddie-style. Needless to say, it wasn’t the best way to start a visit.

However, immediately after that misstep, Eddie walked straight over to his son and began showing him affection, licking him and having a great time being petted by him. The young man fell in love with the sweet, sleek black pup, but Eddie is a big responsibility, so the man and his son left to give some thought to the dogs they had visited.

After considering the decision for a few days, the two came back for Eddie, arriving just before we closed at 5:00. The car had barely stopped when the son jumped out of it, rushing inside to pick up his new best friend. Eddie happily greeted his new family members and posed for his adoption photo. His new dad acknowledges that it might take some time for Eddie to become fully adjusted to home life, but they’re ready and happy to work with him because he’s already made himself at home in their hearts.