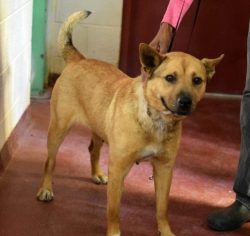 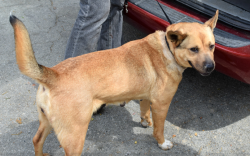 After bringing the Fulton County Animal Shelter to the no-kill threshold in late 2015, one of LifeLine Animal Project’s next big priorities – in conjunction with maintaining the no-kill status – is to more successfully combat animal cruelty in Metro Atlanta. Now, armed with enhanced equipment made possible through this grant, LifeLine’s field services officers are able to build stronger cases in hopes of bringing stiffer penalties for cruelty perpetrators — and, ultimately, send the message to the community at large that animal cruelty comes with significant consequences.

This equipment will help hundreds of pets a year for as long as it survives such regular use.

A concerned neighbor called Fulton County Animal Services to report a tethered dog who appeared to have a “cut around the neck” in mid-March 2016. When LifeLine’s field officer arrived at the scene that afternoon, he found 4-year-old shepherd mix “Sunshine” on an embedded chain. The dog was confiscated, and the owner was cited for animal cruelty and no license.

With equipment made possible by this Petfinder Foundation Purina Technology Grant, the officer took pictures of Sunshine’s injuries just prior to LifeLine’s veterinarian performing surgery that afternoon.

The field officer presented this case in court a few weeks later, and the owner was found guilty of animal cruelty. The judge looked very carefully over the photographs of Sunshine and held up the chain that was removed from her neck, and, addressing the defendant, said: “This is the stuff nightmares are made of.” The county-assigned solicitor recommended a minor fine (per the usual), but the judge disagreed and told the owner that he was imposing the maximum fines for both the cruelty violation and the license violation and ordered him taken into custody to serve 60 days in jail.

The courtroom was stunned, as were the officers in court, who present these kinds of cases every month. Animal cruelty convictions and stiff penalties have been a challenge to come by in Fulton County, historically. Now, fully equipped to tell these terrible stories more clearly, LifeLine Animal Project is intent on changing that.

As for Sunshine, she left the shelter with a New York City rescue group on March 24! (The final photo included below is her just before getting into the van to leave.)